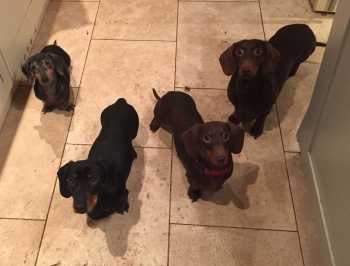 This year Corrine is working on giving her clients even more information to help them navigate those early weeks of having a puppy.  Part of this approach includes writing new handouts for ForPaws dog and puppy training and walking clients that they can use to help address common training problems.  Below is an excerpt from our latest handout on Attention Seeking Behaviour.  If you would like our help in managing your puppy's attention seeking tactics, then sign up to our puppy training classes or training 121s today!

"Most dogs simply love spending time with their human owners and tend to be rather ingenious at finding ways to get and keep their attention, which is one of the joys and blessings of having a dog!  However, like young children, many dogs do not understand the difference between the times when it is okay to seek our attention and the times when it is not and many can be very insistent that we focus on them all the time constantly, which can be exhausting and frustrating for new puppy ‘parents’.

Many puppies are overwhelmed by the change and excitement of their new home brings and spend their first week or so exhausted as they take it all in.  Very often everyone in the house is excited about their new arrival and weeks are spent with it, helping it settle in and adjust.  During these days pups are often the sole focus of the family, receiving love and attention almost every waking (and sleeping!) hour.  But at some point ‘normal life’ has to resume.  Owners need to focus once again on work or family commitments and housework and their puppy suddenly feels a little bereft – they are no longer the centre of attention.  It is small surprise then that puppies at this stage, quickly begin to develop irritating attention seeking habits which annoy and frustrate owners.

Most attention seeking habits are initially cute and because of this, successful.  Small dogs are especially adept at ‘cute’ attention seeking behaviours, often because we tolerate these more from a small puppy than we would a larger or older one.  Jumping up, whining, staring, pawing and licking are all so adorable that many owners give in and reward those habits with attention and so the dog repeats them.  This is fine, until you inevitably one day cannot give in and must work on something without your puppy’s interference.  Then what happens?  Initially pups will start increasing the frequency and intensity of the behavior that worked for them.  They will stare for longer, jump up, lick and paw more vigorously and whine louder and more intently.  If you give in here and give your puppy attention, you will only end up with a puppy that now automatically does this behavior at this frequency and intensity each time it wants attention.  This can quickly become very annoying for owners, the initially cute behavior is now frenzied and highly irritating and even harder to ignore.

Owners that successfully manage to ignore the escalation of cute behavior leave their dog with no option but to try something else to gain their attention.  These owners become pretty good at ignoring different tactics from their puppy… until the puppy finds the one thing the owner cannot ignore.  The puppy’s frustration at being ignored drives them to try lots of different tactics and eventually they will find their owner’s weak spot, such as:

Many of these activities are rewarding to dogs and puppies in their own right.  The puppy may actually begin these sorts of activities as a way to relieve their boredom or frustration at being ignored, but then unexpectedly they get an extra ‘reward’.  Their owner, who previously was stoically and completely ignoring them is now interacting with them once again! And so they repeat these behaviours next time their owner ignores them, it doesn’t matter that the owner’s attention in response to this is unpleasant, any attention beats none, especially if it provokes the owner into chasing them, which can make matters even worse.  Owners who chase their dogs because they have done something bad, reward the ‘bad’ activity with a fun chase and then punish the dog (often by shouting, forcing into time out or even smacking) when they are caught, teaching the dog that stealing is fun, but don’t let the mum or dad catch you!  Can you guess what quickly happens to the dog’s recall?  Another unfortunate side effect of increased attention seeking activities is that the puppy can get quite worked up.  It may drink more to cool off and then race around, unfortunately stimulating bowel and bladder.  Suddenly the puppy needs to wee or poo and the owner who is still trying to completely ignore this bad behavior is faced with a conundrum. Do they get up to run the puppy outside to help toilet training?  Or ignore it because the attention may actually reward the pup?

So what on earth can you do?  If you punish your dog with pain or intimidation you may undermine your bond with your pup and give yourself recall problems?  But you can’t ignore all of those things, you’ll have no home left!  The answer is simple, management.  Management in dog training terms means that you prevent your dog from being able to do things you don’t like."

To find out more, get in touch by arranging a 121 or booking onto our training classes.