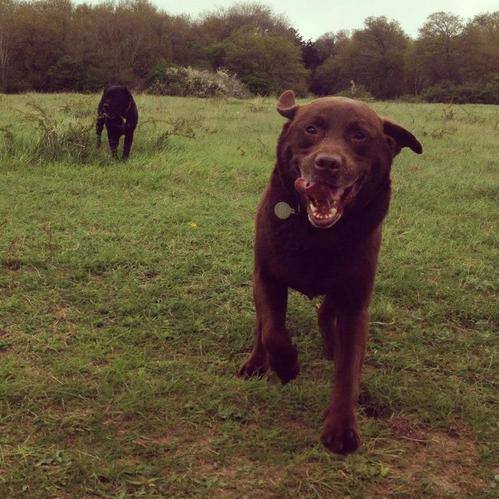 I must confess, since I made the move to work with pets from working in IT, conversations when I meet new people are MUCH more fun.  Tell someone you work in IT and you can instantly see a slight flash of horror on their face as they mumble something about Windows or rebooting PCs, or start quoting lines from the IT Crowd at you.  Tell someone you work with pets for a living and most of the time, their eyes light up, the phone is whipped out and you are regaled with stories (and accompanying photo evidence) of this person's cherished pet - which are always adorable. At some point, they may take a break to tell me just how wonderful my job must be, and I smile, nod and agree and internally start giggling at all of the times that it has not been quite so wonderful!

It is so easy to assume that because you are making a living out of your passion that every day must be pure bliss - which inspired me to write this post, all about the business of being a dog walker and why, on some days, I may be feeling a slightly stronger kinship with Cruella DeVille, than a Disney Princess surrounded by helpful animals...

(* some names will be changed to protect our client's privacy, but Bailey's will not be.  Not only because he really couldn't give a monkey's about privacy, but also because at the time Bailey belonged to my now fiancé and fellow ForPaws Director, Matthew).

Bailey was one of those dogs you could not HELP but love.  He was a chocolate labrador built like wrestler - fat with muscle and a little extra that denotes that he had indeed, been eating all the pies.   Bailey loved his walks with me, so much so that trying to get him from the house to my car was a dangerous pursuit.  I would have to brace myself when opening the front door, if I wasn't standing squarely on two feet, I would be planting my chin on the pavement outside.  He would also love anyone and everyone and would more than happily drag me over to say hello to them too.  This was fab when it was someone friendly, less so when it was the traffic warden writing me a ticket for parking on double yellow lines to pick him up!

Getting Bailey into my car was also an interesting exercise.  Bailey was fit, healthy, with no injuries or conditions that would prevent him from jumping into the car.  On the way to a walk, he had NO PROBLEM doing this.  When loading up to drive home at the end of the walk however, he seemed to object on principle.  I tried:

Sigh.  The only thing that would work consistently would be me lifting his front paws onto the back (and suffering looking like a dodgy KISS wannabe as he smeared my make up all over my face by licking me - not to mention the fact I KNEW what he had just been eating!) and then hurrying to lift his back paws up to wheelbarrow him in - which worked provided no one walked past that he wanted to say hello to!  I have NEVER seen so many people laughing at me whilst trying to load a dog in my life!

On walks, Bailey was a superstar.  At first.  Then he developed a tendency to approach other dogs and hump them, then get grumpy with them when they had the indecency to be upset with him!  After 2 highly embarassing snarly spats, I decided that this was not going to be acceptable on our walks and so we worked a new set up where I fed Bailey cheese for walking past other dogs.  Bailey was happy, and so was I, and this technique is still used by my ForPaws walkers today as "the Bailey technique" - it is highly effective!  It wasn't long until the sight of another dog to Bailey meant 'FOOD' and desire to hump was replaced by desire to eat cheese as we walked by!  It's funny how dogs take after their owners...

Bailey was one dog in a million, he was an absolute darling, but a chance of circumstance meant he no longer needed a walker, so sadly my walks with him drew to a close.  On our last walk together, at a very public dog walking location, as I returned to my newly sign written car (complete with signage denoting the fact that I am a dog trainer) I came across an clean animal skull lying in front of the back door of my car.  Both Bailey and his brother Tom were on lead and lunged for the bone at the same time, then launched into a rather loud argument over who's bone it was.  They were easy to separate (neither wanted to hurt the other, they just wanted the bone for themselves!) but I couldn't load them in the car whilst the skull was anywhere close - so I stood there, rather stuck with two grumbling dogs at arms length from each other waiting for help!  Thankfully someone was kind enough to come and move the skull away from us and blushing furiously, I thanked the man, loaded the boys faster than ever and drove off, wishing my sign writing would evapourate and feeling more than a tad embarassed!

So, why am I telling our lovely ForPaws friends and readers about this?  Firstly, because when you work with animals, these things happen - and it's worth remembering if you ever encounter a frazzled dog owner or walker and their cheeky dog!  Secondly, we want customers to chose us, knowing that we know dogs can be cheeky and that we have all the skills, time, patience and, most importantly, cheese, required to walk their dog in a safe and enjoyable way!