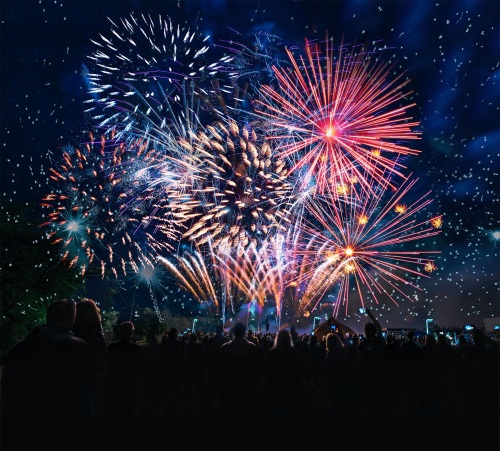 As we are less than two weeks away from the dreaded fireworks season, it seemed like a good time to blog about what you can do to help pets that are scared of them.

Many dog and cat owners see their pets shaking, hiding, drooling, pacing and episodes of diarrhoea in response to fireworks and well meaning friends often advise “if you don’t make a fuss, they will learn they have nothing to worry about”.  Whilst this may seem like sensible advice, this is actually quite a complex issue and needs a little more understanding about both training and emotions, to really address it well.

So when people say to ‘not reinforce fear’, what they are actually referring to, is not giving positive reinforcement (cuddles, reassurance, physical contact) to an animal who is afraid, so that they are afraid again in future.  But actually, this isssue is not quite so simple.  Reinforcement and punishment really apply to behaviours that are under some form of cognitive control, or choice.  If we give the dog a treat every time it sits, the dog choses to sit more because it gets a reward.  If we ignore the dog every time it barks for our attention it (in theory!) learns not to bark because it will not get what he wants (negative punishment).  So reinforcement and punishment of course can change actions or behaviours that are under cognitive control - but, emotions are not under cognitive control.

Emotions stem from the ‘limbic system’*.  The limbic system is the emotional system in our brain that sits and operates beneath the cortex, which is the cognitive, reasoning, part of our brain and it seems to be similar across many species  (for more information on this read more about the work of neuroscientist Jaak Panksepp).  The emotional response essentially operates independently of and in addition to the cognitive system.  This is why you cannot simply tell yourself to ‘get over’ something that has upset, angered or worried you.  Your cortex cannot override your emotions, no matter how hard you try, because your limbic system has already made the decision to fire up the sympathetic nervous system, raising your heart rate, your breathing rate, releasing adrenaline and very often making us need the loo!!!  This is part of the ‘fight or flight’ response and this response to something that scares us, actually happens before we consciously process the fear in our cortex (the higher reasoning part of the brain) because the pathways are shorter and faster.  This means not only is a fearful response to something not something we can simply ‘reason past’ it also happens before we are even mentally capable of even trying to override it.

So how does this apply to our animals and fireworks?   Essentially, the fear response that you see in many pets that are scared of fireworks, is a virtually instant and unavoidable chemical reaction to a loud noise that is hard wired into their brain – whatever behaviours you see, shaking, vocalisations, urination and defecation, are outward displays of their inward emotional state.  You cannot reinforce these behaviours, they will likely happen with or without your input.  This is often a big relief to owners who think they have inadvertently caused this fear!  Really you haven’t!  Equally trying to suppress this, by withdrawing reassurance, or even worse punishing this with shouting, will actually on serve to heighten distress, as the human that they love and normally trust becomes strange at the same time the loud scary noises happen – doubly scary!

Of course, when our animals are young and learning about the world, there is a little bit of flexibility with this concept.  When they are younger they have a window of opportunity to learn and explore and build confidence and at this stage, I personally feel you can reinforce them avoiding something they are unsure of, which reduces the chance of them going back to it, investigating it a little more and building confidence around it.  But this is part of juvenile learning, and doesn’t apply to the outright fear or terror that you see in response to things like fireworks in many animals.  There is no way that you can stop a dog feeling scared if they already are, by ignoring them.  That is just not the way fear works.

So what can you do then, to help your animals over firework season?  Firstly, if your pets are clearly distressed by fireworks, please can I urge you to speak to your vet.  There are medications that can be given which help.  Investing in a qualified behaviourist can also help for the long term to work on improving your pet’s response alongside medication.  Other things you can try, really revolve around creating a safe, comforting space for them to sit it out in.  Walk or let them out before it gets dark and keep them in when it is night time around fireworks season.  Try closing windows, curtains and doors to reduce the flashes and sounds of the fireworks.  Create a safe covered den for your pet to ‘hide’ in (if they want).  Play music or tv to reduce or muffle the sound.  Perhaps try DAP (Dog Appeasing Pheromone) or Feliway plug ins in the room they are in.  If your dog is generally an anxious type you can also look to address this as many phobias are connected.  When I worked as a behaviourist, I had some success with moving client’s dogs onto the Breakthrough Diet, which seems to increase levels of tryptophan reaching the brain which is converted into calming serotonin.  Give your dog activities to do, such as with a kong or chew - do note however that fight or flight energy tends to turn off appetite, so you may find that a dog or pet that is particularly scared of fireworks may completely ignore food activities they normally love.  Above all else, I recommend that you be there for your pets however, your presence can help reassure them and comfort them, by firing up another part of the limbic system, the part that deals with care and familial love.

For more information on how you can help your pets with fireworks, please do speak to your vet or local behaviourist – there are many ways they can help!

*for scientific  accuracy it should be noted that the limbic system as a concept is debated as many parts of the brain have more than one function and many brain aspects are argued as to whether they are part of this theoretical system or not.  However for the purposes of this blog, the limbic system refers to aspects of the brain that work together, independent of the cortex to influence emotion.