When people think of getting a puppy, they always think of all the good stuff, the cute little face, hilarious antics, walks in the sun, cuddles on the sofa.  The bad stuff, well it isn’t that bad is it?  You know loads of people that have had puppies and they did fine!  Recently I’ve met a few new puppy owners who haven’t quite been having as much fun as they thought they might have with their puppy and so I thought it was finally time to come clean about about my own experiences with ‘post puppy depression’ (and yes I know this is NOT the same as post natal depression, but its the best description I have)…

It first dawned on me that things might not go as well as I’d hoped on my IMDT assessment weekend - 1 week before we were due to pick up our little bundle of mischief!  I’d done my homework both for the assessment and for bringing home Lexie and I was convinced that we would be fine.  I scoffed at the time limits for accomplishing the various puppy training requirements like chew toy training, bite inhibition and toilet training - we’d be done in weeks, not months!  But at some point on the assessment weekend, it dawned on me that maybe, just maybe, it wasn’t going to be as easy as that and a little feeling of uneasiness started creeping in.  The day after the assessment weekend, I got home and our flat was packed up in boxes - the day after that, we moved to our new house and 2 days later (with minimal unpacking done!) we set off to pick up Lexie, staying overnight before getting her and starting the 3.5 hour journey home.

On that first day, we spent 1.5 hours out in the garden with Lexie, waiting for her to wee so that I could follow up with 3 treats (I was prepared!) but nothing happened.  Lexie explored a lot, but clearly didn’t feel the urge to wee.  So we went back inside resolving to ‘keep an eye on her’ and take her outside at the first hint of any of the usual toilet warning behaviours.  As soon as she ran in she squatted on the carpet and weed - laws of puppy toiletting don’t lie, at that point she was desperate and went as soon as she was in ‘familiar territory’!  And so it began.  As I’ve already blogged about the UTI that left us frazzled and poor Lexie going for a wee 3 times an hour, I won’t drag out this story - suffice to say, it got sorted, but it took 3 weeks, a couple of courses of antibiotics and we had to replace the carpet in our dining room with lino.

Incidentally, that lino didn’t last very long… Two weeks later, one morning when I was at work and she was home alone, Lexie was scrabbling at it and managed to pull it up away from by the door and tore a huge chunk out of it.  So we paid out for laminate, which thankfully lasted, but it was an expensive lesson in ‘false economies’! 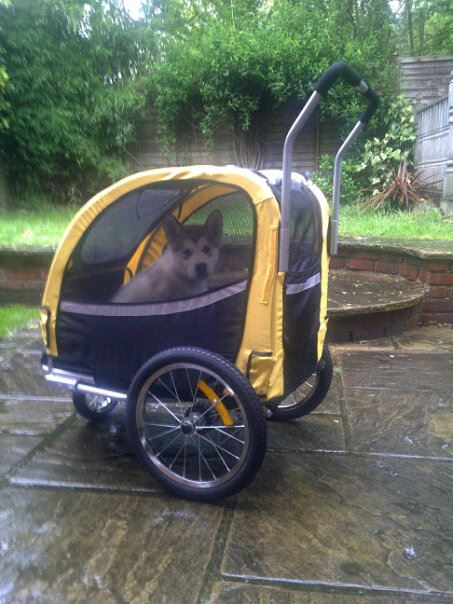 Whilst this was going on, we were doing our best to socialise Lexie, taking her out in her little ‘pram’ before her vaccinations were done, but every single time we did, without fail, she would wee and poo in the back of the car en route.  We got clever and tried to wait until she’d just been - but somehow she seemed to have reserves and would go again!  We got to the point where we dreaded taking her out (not good during those first 16 weeks!) as we knew we’d have to pull over within minutes to clean up the car.  I’ll never forget my first ill-fated trip to ringcraft class - Lexie managed to do a number 2 in the back of the car and I had to break suddenly, she fell INTO the poo and we were both covered in it as I tried to clean us up!  Beautiful!

I remember living for the moments when she went to sleep, when I could get some work done on the business, which was in it’s first 6 months.  When she slept I worked like a demon, when she was awake I tried to work (ever tried NOT keeping an eye on an energetic awake 10 week old puppy!?) failed miserably and had to run around doing damage control.  If one of my owners came to me with this problem, I would usually discuss and help them implement proactive ways to prevent the damage and create good habits, but at this point we were both so frazzled we couldn’t do anything but react!  One of her favourite games was emptying the water bowl with her front paws and looking thirsty so we had to refill it, only for her to empty it again.  One day I came down and Pete had taken his eye off of her for a moment and the phone extension had been ‘disconnected’.  Sofa cushions exploded.  My desk stool was ‘destuffed’ - twice.

Just weeks into having our new puppy I think both myself and Pete felt like huge failures, Pete was exhausted and I’d spent a fair amount of time walking out of the room to cry, clinging to two reasons to keep going.  Firstly, that the breeder had put a lot of faith in myself and Pete to manage as we were first time dog owners with a very energetic breed - I didn’t want to let her, or the gorgeous puppy she’d bred us down.  Secondly, how could I give up on our puppy and call myself a dog trainer?  So we soldiered on, trying not to talk about how frazzled we were, sticking to the advice we read from trainers I respect, but feeling dejected that it didn’t seem to be working.

It’s not always easy asking owners to stick with rules and techniques that don’t always appear to be working very quickly, having had the experience I did with Lexie, I can see why they are often tempted to try more punitive techniques to teach their puppy not to do things they don’t like.  Often it seems the opportunities to reinforce the right behaviours are few and far between and you feel so emotionally shattered that trying to proactively create these opportunities seems impossible.  I think we often assume, when we see our neighbour’s perfectly behaved adult dog, that the dog was ‘born perfect’ and that they didn’t have to go through all this.  Or we remember the dog we had in our childhood that was perfect, forgetting or possibly being too young to remember the training our parents put in.  We forget that dogs are a completely separate species, who operate on basis of ‘the world is my toilet’, ‘all things are chew toys’, ‘all trouser legs are tug toys’ etc.  They do not come pre-programmed with how to live with humans, we have to teach them, and like any lesson or habit, learning takes time.

So - how are we now?  Amazingly after just a few months these problems disappeared.  It was refreshing to suddenly realise that Lexie hadn’t had an accident for days, she was only chewing her toys and had learned to be awake and not cause damage to something valuable!  Although I’m not going to lie, it took us quite a while to recover, possibly leaving full time employment, starting a full time new business venture, moving, raising a puppy and getting married within a 10 month period wasn’t the best laid plan!!! So we threw out the idea that we were failures as dog owners (and a trainer) if we didn’t have the best behaved dog and decided we would aim for the happiest dog who thought it’s owners were awesome and we concentrated on scentwork games, trick training and fun agility!  The pay off to the bond we have with our gorgeous and lovely dog is amazing - all of that frustration and upset are thankfully long gone.  But we’ll never be finished, Lexie will forever be ‘work in progress’, just like her ‘mum’, me!

So if you’re reading this because you feel blue with your new puppy - take comfort, you’re not alone and it will pass.  If the force free ‘happy clappy’ techniques that your trainer is advising make sense, but don’t seem to work, hang in there, they will click in soon.  Maybe give your trainer a call - they should be happy to listen and just reassure you that you are doing the right thing.  I know I would rather my owners call me, than feel they have to deal with this alone.

If you’ve not yet signed up to a class but are struggling with your dog or puppy, then have a look at the training classes and options that we offer - we’d love to meet you and help you build the bond with your puppy that you both deserve.

Oh, and if you ARE thinking of getting a puppy, perhaps don’t if you are getting married and/or moving and/or starting your own business at any point soon?